What passing bells for those who die as cattle?
Only the monstrous anger of the guns.
Only the stuttering rifles rapid rattle
Can patter out their hasty orisons.

2014. One hundred years since the beginning of World War One, and we are assailed – in Britain at least – by programmes and articles of commemoration. What struck me as I watched the Jeremy Paxman’s excellent BBC documentaries was how little I actually remember from my school history classes. As Paxo strode about meaningfully, it was as if he was talking of things completely new to me. I know we studied the period, but beyond an image of trench warfare on the Western Front and the evocative names of Passchendaele, The Somme and Verdun, not much at all had stuck. Casting my mind back to English Literature classes was different. I was able to type out the words above without needing to check – and this from a lesson over 30 years ago.

Of course, I can’t remember the whole poem. But there’s something about those lines first lines. Something that just burns the words into the mind. Something that captures the crack of gunfire in the trenches. And that thing is the sounds of the words so artfully combined. The consonance of those ‘t’ sounds, and the alliteration of the ‘r’. This, perhaps more than anything else, is what makes it memorable.

And alliteration doesn’t end with poetry. Guy Deutscher’s magnificent book, “The Unfolding of Language”, taught me many things, including one that – I’m ashamed to admit – had never occurred to me. All language – everything – was invented by someone. Every word or phrase or construction was said at some point by someone for the very first time. After that, it was a ruthlessly Darwinian process: either it had impact and was therefore endlessly repeated, or it faded either faster or more slowly from memory and the language. But what was it that was likely to make something memorable and therefore repeatable? A cursory glance at modern English shows that this was often those old standbys from long forgotten literature lessons: metaphor, simile, rhyme, alliteration. In fact, alliteration is found again and again in English phrases:

to make up your mind, to pay the price, to count the cost, to put paid to, to face the facts – and on and on and on.

These phrases – the very fabric of our language – are the survivors in the battle for attention, memory and repetition. They won because of their form – in this case their alliterative allure. This theme is picked up by Mark Forsyth in the excellent “The Elements of Eloquence”. He argues that, great as William Shakespeare was, his greatness was not down to genius; it was down to the hard work of learning and practising the tools of rhetoric, among them alliteration. He shows how powerful this tool is by comparing a section of Anthony and Cleopatra with the source Shakespeare used for the historical details. The passages are strikingly similar, but what lifts Shakespeare’s words far beyond the original is predominantly his addition of alliteration (the alliterative words Shakespeare added are here in bold):

The barge she sat in like a burnished throne,
Burned on the water; the poop was beaten gold;
Purple the sails and so perfumed that
The winds were lovesick with them;

As Mark Forsyth points out, it didn’t begin or end with Shakespeare or the poets.
Alliteration is used everywhere from advertising slogans (And all because the lady loves Milk Tray), to politics (Ban the Bomb), to ecommerce (PayPal).

If it’s good enough for them, then speakers will surely see sense and put it into practice in their own presentations. 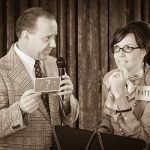